Unfortunately, Catherine McKinley’s “Indigo” is another one of those books that could go grossly overlooked because it’s informative. Truly her search for indigo revealed the severe tie between cloth and world history everywhere.

A reader will get much more than the story of indigo in the world of textiles. In this narrative ethnography, full of desire and color, the reader will be introduced to the Nigerian medical doctor who discovers a cure for AIDS but then just a few pages later the reader gets folded back into cloth while learning that the Netherlands was the fourth-largest, slave-trading nation whose Dutch textiles made up 57 percent of the goods exchanged for human lives during their slave trade. Cloth constituted more than 50 percent of European exports to West Africa on a whole by the late 1600s—so that we see the incredible importance of cloth to West Africans that they would exchange lives for it. Concurrently, abolitionists over in America were staging boycotts of indigo and all of this information goes very well towards feeding the reader with the zeitgeist of the times.

Cloth takes on its own persona in “Indigo.” McKinley makes cloth come alive as she explores its processes and its history in pre-colonial Africa as well. She effectively runs through the various types of cloth that were exchanged from East to West and North to South. Everyone around the world loved cloth in all its colors and textures. She also succinctly points out on a general note that the making of the ‘beauty’ during colonialism is also the making of the crisis that consumed many West African countries post-colonialism.

Every bit of indigo McKinley can find not only furthers her Fulbright research but furthers her insatiable desire to ‘feel’ the history of the people when it is not readily communicable from its owners. She believes in understanding by osmosis so that when she lacks the information to steer her in the right direction for more culture, rather than assuming there is no more knowledge to be gotten, her self-determination, sheer faith, and belief in the power of cloth pushes her straight through to the places she needs to go and the people she needs to meet over and over again throughout her West African journey.

The textile cultures McKinley discovers have been in West Africa for a very long time and as the needs of a global economy loom, she explains how that has necessitated that many West Africans start to place the pursuit of financial gain over the maintenance of laborious yet ancient and rare textile traditions. These cloth traditions do more than impart beauty but also translate generational heritage as indigo has been included in dowries passed down from mother to daughter and the symbolism embedded in the cloth itself expresses the various cultural values from ethnicity to ethnicity and country to country that she explores.

The Lying and The Fool

The Lion and The Jewel
was the lying and the fool
the fool was a woman
who got lost in the woods
an abnormality understated
a woman who
wakes up early
in the morning
and stretches
shakes it all off
who wants more
and works for
it
never loses it
who expects more
and never
chooses
it
gets chosen
the right way
knows how to forage
and
cut trees down
low
doesn’t need to climb up high
and swing from pole to pole
not knowing where loyalties lie
not knowing where lions cry
not knowing where beauty dies
makes it
easy for you to get lost
or lose it
but
a good woman
thundering her own applause
who sharpens her claws
and smiles when challenges wax
and wanes insane
never gets lost
in the woods
in the hood
is never misunderstood
can explain
make it plain
reflects on disdain
and never accepts
it is
not obviously something she is
going to get
if
she tries…..
the east and the west
at best
cannot get her
the north and the south
closed mouth
cannot convince her
when rooted strong
in common sense
she goes hence
she never forgets
to learn
something new
every day
means she flies 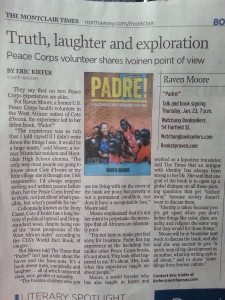 A New Kind of Poem

Documenting
my progress
as a first-time,
published
author. Many
more to come.
Eureka. 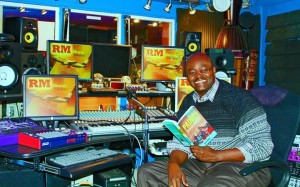 Finally my book by Raven Moore is here!!! Raven dives into identity from the Ivoirien point of view. Color, class, gender, sexuality, and more- “PADRE” takes you on an intense yet funny adventure that teaches you how to create a unique point of view. Raven is that missing voice from Generation X and she gives this voice to you in the way Generation Xers would use it, when they would use it, and why they would use it. You feel like you are right there with her. She is that one writer who knows how to generate a global discussion on transcultural issues without giving you a headache-making you want more. Read it! -Roger Muntu- 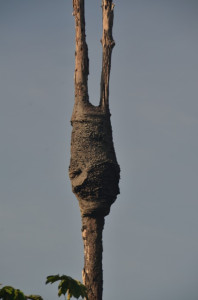 These termites conjur up images of native peoples on TV in different parts of the world, sitting down to munch hardy on insects. When Céline serves me up a plate of termites, however, I suddenly have a feeling for what is really going on. Those people you see on TV don’t wanna’ eat that. Man, if you have got to climb up a tree to pick termites out of their hole one by one, cook them up, sauté them with some onions and peppers, season them with a little bit of Cube Maggi and salt for extra flavor, and eat the poop in the middle that tastes like wood (of course), you ain’t enjoyin’ that. You hungry! And you’re eating whatever you can get your hands on when the real meat is harder to hunt. When you go from Futu Banane with savory peanut sauce or delicious okra sauce, you know that you’re struggling when all you can find are termites with onions for dinner! Please. Every Ivoirien that I have met so far takes pride in being able to put together a meal that takes forever to prepare. Termites only take a few minutes.