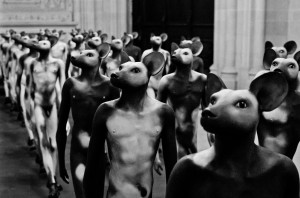 ‘It’s cultural.’ Don’t you hate it when someone says that? That just means, “I don’t understand why you did that but okay. I don’t have time for an explanation and you probably can’t give me one anyway because you’ve been doing that all of your life.” When someone does something weird is it really cultural or is it just weird? Aren’t there basic, universally accepted ways to act? We’re all human. If I shaved the head of everyone on the planet, we wouldn’t feel that different. So, how can we be so different? We have all the same body parts. And, by the way, this analogy is just cultural. You don’t have to know where I’m going with the hair thing. Just accept that it’s along the trajectory of my current thought process… because I’m American… and don’t always feel the need to be clear… and you can make some sense out of it later… if you want to.

From culture to culture we do, in fact, seem very different—thousands of languages that use different words to say “I love you,” thousands of ways to cook vegetables, millions of ways to make music, so many ways to design with cotton, and forget about all the ways you can avoid getting a job—like going to grad school without knowing why or marrying the first person who asks you because they bought you a TV. Greetings are the only things I can think of that don’t surpass the number ten. Not that I know of ten ways to greet, but I’m sure that’s a safe number.

Everyone either kisses, hugs, bows, smiles, or shakes hands. And, it’s not by block, neighborhood, or even city, but whole countries and continents that are unified on this principle. The perfect way to greet someone gets very little resistance. And, it confuses me because as much as we fight, disagree, rape, and kill each other, there are at least a billion people who will very happily hug someone in greeting that they don’t know, another billion who will kiss someone on the cheek in greeting that they have never seen before, and another billion people who will shake hands with someone who could have been doing anything with their hands just a minute before.

Don’t get me wrong. I’m not a germaphobe and I think all of us living today—plants, humans, other animals, and all other existing life forms—somehow made it for millions of years without hand sanitizer because we didn’t need it… or because we didn’t have hands. But, I’m just saying, a lot of stuff that humans do is inconsistent. Birds and ants are more consistent. Maybe when humans have been on earth as long as birds and ants have, we will be as predictable.

How did all the different greetings evolve? Well, it’s said that the handshake originally used to be proof that you weren’t carrying a gun. But, guns first came on the scene about 1,000 years ago in China and I don’t see Chinese people shaking hands to greet. So, yeh, that handshake point is actually cultural… or circumstantial. Everyone kisses and hugs although they may do it at different times. I can’t quite allow myself to put kisses and hugs in the cultural category yet. It’s just what people do unless you wanna’ compare people to something else—then it would be cultural.

By the time guns got to Europe around the 13th century, did it become so dangerous there that millions of people had to agree on a way to know whether or not someone was getting ready to shake them down or send them to their maker? And, if that was the case, why don’t handshakers just put both hands up in the air whenever they meet someone? Maybe they were doing that and then someone, like myself, said, “hey, woah, this is getting a little ridiculous and it’s too late to start kissing now like those other billion people over there so let’s just go for a one-hander.”

And, how do Germans greet, by the way? This is really another pending question for me. I’ve never seen a German kiss or shake hands with another German. And, me not knowing this, is also cultural. It’s not that I’m dumb. It might be that I’m dumb. Just call it ‘things that I culturally wouldn’t have an inclination to know… because I’m American… or because I’m from New Jersey.’ I can get as many as 4 kisses in France, 4 in Gabon, 3 in Switzerland, 3 in the Netherlands, 3 in Cote d’Ivoire, 2 in Spain, and 1 in Colombia. It’s so odd to kiss on greeting, for me as an American, that I kind of think it reflects some profound difference in brain chemistry. I’m just not as happy as a French person, I guess…

In any event, unity in greeting is a consistent force that is bigger than Facebook. Maybe it didn’t spread as quickly as Facebook and maybe there are a few variations, but this unity encompasses whole regions and almost whole continents that have been unified in this way for over 1,000 years. It’s our proof of the human connection. And, it’s cultural. Don’t try to understand it, Raven. Just accept it. It’s called world culture and we need more of it. There are only so many ways you can greet someone and I don’t think that’s for lack of imagination but because people, for the most part, think alike even though—with all our crazy hairstyles, crazy music, crazy food, crazy rituals, crazy religions, and crazy clothes—we seem so different.

Not that many ways to go to the bathroom, either—toilet, latrine, grounded Japanese toilets, bidets—there are even less ways to poop than greet a person. But, that’s a sad world cultural fact. There really should be more toilets that accommodate accidents. Just ask my sister. And, toilets came way before the handshake so you’d think there’d be more diversity in that, too, but no. That’s one thing we as humans have agreed upon the most. And, the kiss on the cheek came way before the toilet. I mean it had to. Like, when the husband (or wife since women are usually the ones that keep it clean), went to go work on that first toilet invention several thousands of years ago and the wife sent him off with a kiss saying, “Don’t let that toilet nonsense make you late for dinner, honey. We can just go in the woods like everyone else.” Kisses and toilets, I’m glad we all agree on those things at least.

Whatever the order, it obviously takes us a really long time to universalize things that make sense. Maybe healthcare will be next—“Getchyo’ hand out my pocket! I don’t know you!… But, gimme’ a kiss.”