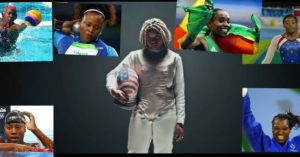 If you are a nationalist, you may not notice the brown conspiracy happening across the Rio Summer Olympics. You might be too busy rooting for your own country to notice that the underrepresented are representing themselves quite well in Brazil. Black girls from around the world are stepping up in a big way and showing us that Black lives matter by keeping their own intact, prominent, and dominant. They are winning not just where they are expected to win but in many places few knew they even had interest. They are fencing. They are in water polo. They have captured judo. They are daring themselves into swimming. And, they are powerful in gymnastics.

At just 23, Nzingha Prescod, born and raised in Brooklyn has stepped into an arena that is not usually available to children in urban areas. Simone Biles’s mother could not take care of her growing up because of drug addictions, but Simone has now become the first woman in the world to win three consecutive World Championship titles. And, let’s not even go into what many of the African athletes have been through to get here. World record breaker Ayana Almaz comes from the 2nd poorest country in the world—Ethiopia.

The stereotypes have always been clear. Black people have short twitch muscles, not long ones. They can only sprint. They do not do distance well unless they are from some mysterious country called Kenya where no one can quite figure out why their runners are doing so well. Black people cannot swim. They are afraid of water. Now, we have Simone Manuel and Ashleigh Johnson to say the latter is wrong.

This summer’s brown feats are not just wonderful because they smash the stereotypes, but because of what they represent about the societies Black people are living in. Becoming an Olympic champion takes money, time, energy, space, education, and an enormous amount of emotional support, many of these things not historically available to people of color in the U.S.A.

If no one had stepped in and cared for that little Black girl with a drug-addicted mother, Simone Biles would not exist. If the men training Nzingha Prescod had spent their time ogling her as a female object instead of giving her technique, mental agility, and strength, where would she be today? Not in Rio. Not alive possibly given the rate with which young, Black people are being targeted by the police.

So, yes. By all means, be a nationalist if it means you are for equal protection under the laws for all citizens. But, also be a globalist and notice the shift. Your world is getting better. People of all backgrounds are showing up and showing the world that anything is possible and that talent can go as far as one’s commitment to greatness.