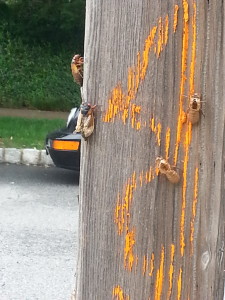 Scientists have concluded that there are about 15 broods of cicadas that come out of the ground across the United States about every 17 years and June happens to now be cicada season for most of the entire east coast. Cicadas emerge from the earth, play hard to get with an unceasing whistle of a mating sound they make with their body parts, fool around, get pregnant, bury their eggs, die, and then their eggs hatch and return to the ground; all occuring in a matter of weeks. Teenagers.

Black bears are one of the largest animals in New Jersey. A baby one was pulled out of a tree in Montclair just today. Is it so cute as all of the onlookers gushed it to be or so end of their habitat? They keep the ecosystem going, enjoy a trashy meal, are a quickly growing population, and attacks by black bears are rare. So, if you find yourself underneath one, you must have stared at them a little too long, were a little too quiet, moved a little too much, and appeared a little too unintimidating for your own good. Most people don’t dare to even exist. Black bears don’t get much taller than you or I, but can weigh anywhere between 200 and 600 pounds. Pigs.

Scientists have also discovered that women are capable of enormously high levels of multi-tasking, all manner of intelligence, can paint their toe nails and drive at the same time, can deliver up to eight babies in one birth, keep multiple jobs and a clean house, read, make more money than men, please themselves, lift heavy objects, focus, and even run 26.2 miles in less than 2.5 hours. Astonishing.

Ellen Johnson-Sirleaf is Harvard-educated, a former World Bank Economist, the first female President of an African country on the entire continent, a proponent of gay rights, married at 17, mother of four, divorced, and recipient of the Nobel Peace Prize. Typical. We anticipated this. That land of miracles we call Africa. Surprise us some more.